We invite you to explore Bucharest, the capital of Romania, the main political, administrative, economic, financial, banking, educational, scientific and cultural center of the country.

Money: Romania’s currency is LEU
For more information on the level of exchange rates, please consult the page of the National Bank of Romania.

Most of the attractions of the City are included in the Bucharest Sightseeing Tour offered to the participants at the BGS CONGRESS 2021.

In Romania, time has preserved the scent of the past and has embedded it in never-ending stories. You are invited to discover them trough our Social Programme and the Field Trip which includes a visit at the iconic landmark of Transylvania – the famous Gothic structure, often associated with 15th century Walachian Prince Vlad Tepes, the inspiration for Bram Stoker’s Dracula.

You can find more information about Romania on the website of the Romanian Official Travel and Tourism Information Center.

The Palace of Parliament is the world’s second-largest building (after the Pentagon) and the world’s largest parliamentary building, a visually astonishing work of architecture. It is also the third in the world considering its volume, being overpassed by the cosmic shuttles assemblage building- Cape Canaveral, USA . Can be visited by pre-registered guided tours. Valid passport or national ID is required to gain access to the Palace.

National Village Museum. Located on the shores of Herăstrău Lake, this museum is a collection of several dozen homesteads, churches, mills and windmills relocated from rural Romania. Built in 1936 by royal decree, it is one of Europe’s oldest open-air museums.

The Arch of Triumph – inaugurated on the 1st of December 1936, glorifies the bravery of the Romanian soldiers during the First World War, celebrating at the same time the 1918 Union of Romanian provinces.

The Lipscani area is the oldest remaining part of Bucharest and has the scent of the important commercial zone from the middle ages. This district is home to an energetic nightlife scene and hosts the ruin of the  15th-century Curtea Veche Palace, where Prince Vlad III (“The Impaler”) once ruled.

National Art Museum – Romania’s leading art museum was founded in 1948 to house the former Royal Collection. The Collection includes Romanian and European art dating from the 15th to the 20th century, with art gems like Brancusi sculptures,

Find out or more about the City Sightseeing 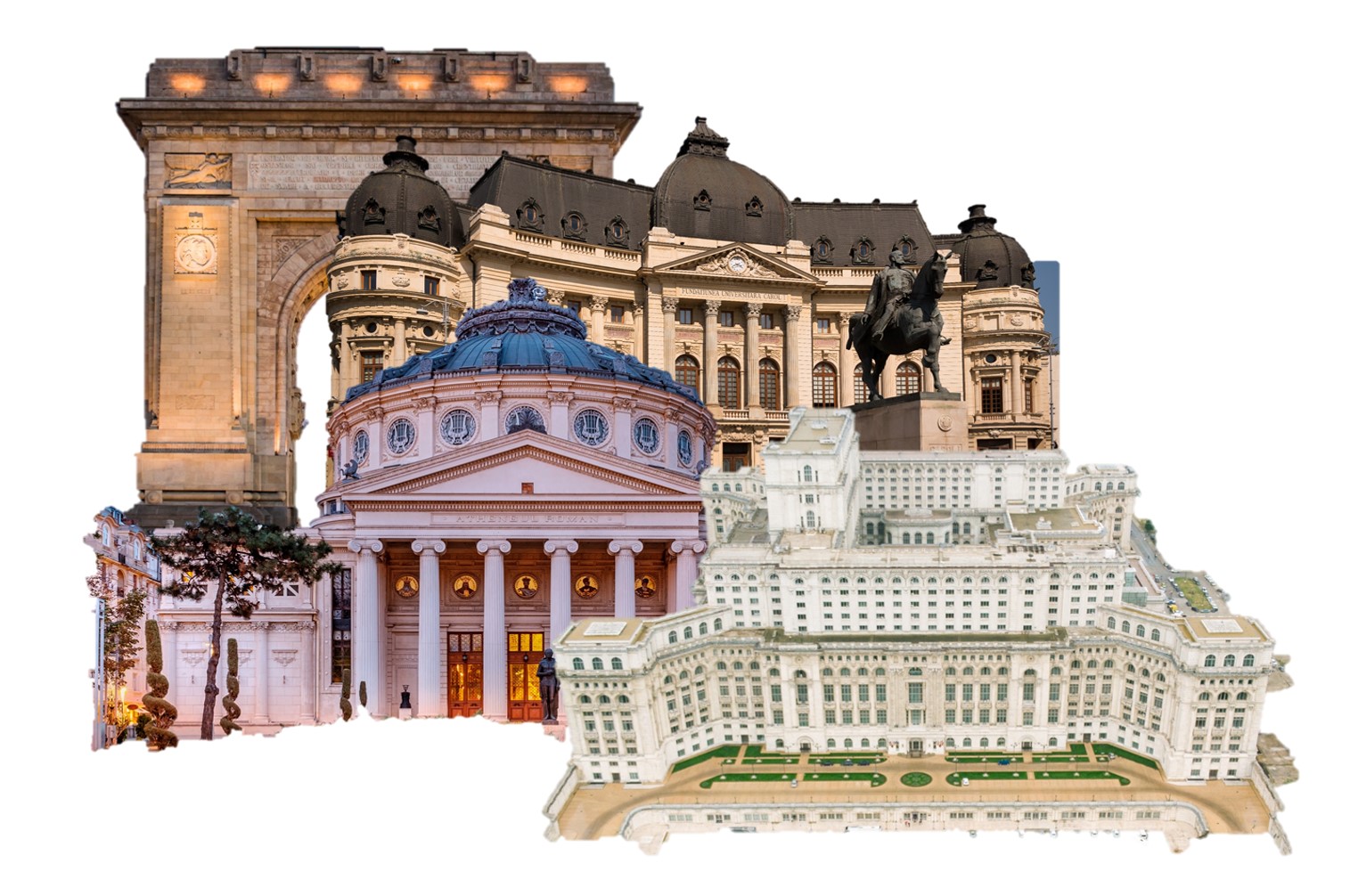 Bucharest is well connected to almost the entire world.
Daily flights arrive and depart from the Henri Coanda Airport.

By plane:  Flying to Bucharest is the most straightforward manner of getting to the capital of Romania. Bucharest is serviced by two airports: Henri Coandă Airport (Otopeni) and Aurel Vlaicu Airport (Băneasea). Both of these airports connect Bucharest with major cities in Europe and operates normal flights, charter and also low-cost flights

Official taxi and busses are available from International Airports to the City Center.

By BUS: Bucharest is linked with the main European cities at very competitive rates

Coming from the airport to City Center

– On-demand taxi services are available.You may access these services by contacting the “Taxi by request” desk.

– The taxi station is located at the exit of the terminal, at the ground floor.